Engineered Timber Solutions (ETS) will be supporting their local Shropshire rowing team, the Wrekin Rowers as they take on the world’s toughest race, the Talisker Whisky Atlantic Challenge.

The race starts on 12 December and the intrepid team of four will be rowing from the Canary Islands to Antigua, which is 3,000 miles across the Atlantic.

Chris Williams, Managing Director of ETS, who manufacture roof trusses and floor joists, explains how the deal came about: “Stuart Richards from the Wrekin Rowers is a customer of ours. He runs SMR Builders along with his two brothers. The company has a fantastic local reputation for building very quickly without compromising quality. As soon I heard what they were taking on I knew we needed to
support them.” 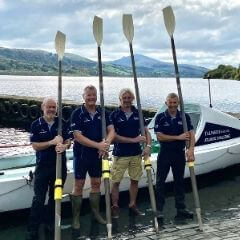 The team comprises of Stuart and Gary Richards, Martin Skehan and Stuart Shepherd. They intend to raise £100,000, which will be split between two charities, the Royal National Institute of Blind People (RNIB), and Severn Hospice. The RNIB charity was chosen, as Stuart Richards is visually impaired, although it has never stopped him taking on a challenge. The Severn Hospice was chosen for their exemplary care and was selected as family and friends of the rowers have been looked after there.

Stuart Richards of the Wrekin Rowers said: “We are pleased to have ETS join us on this big adventure. It is quite a daunting challenge but we are training hard and looking forward to it. To put it into perspective fewer people have rowed an ocean
than have climbed Mt Everest.”

As the Wrekin Rowers are taking on such a big task we decided to find out more about the charities they are fundraising for and how they are preparing for their epic journey – here’s what they have to say.

To find out more or to support the Wrekin Rowers please visit
https://wrekin-rowers.com.

You can find out more about which cookies we are using or switch them off in settings.

This website uses cookies so that we can provide you with the best user experience possible. Cookie information is stored in your browser and performs functions such as recognising you when you return to our website and helping our team to understand which sections of the website you find most interesting and useful.

Strictly Necessary Cookie should be enabled at all times so that we can save your preferences for cookie settings.

If you disable this cookie, we will not be able to save your preferences. This means that every time you visit this website you will need to enable or disable cookies again.

This website uses Google Analytics to collect anonymous information such as the number of visitors to the site, and the most popular pages.

Please enable Strictly Necessary Cookies first so that we can save your preferences!